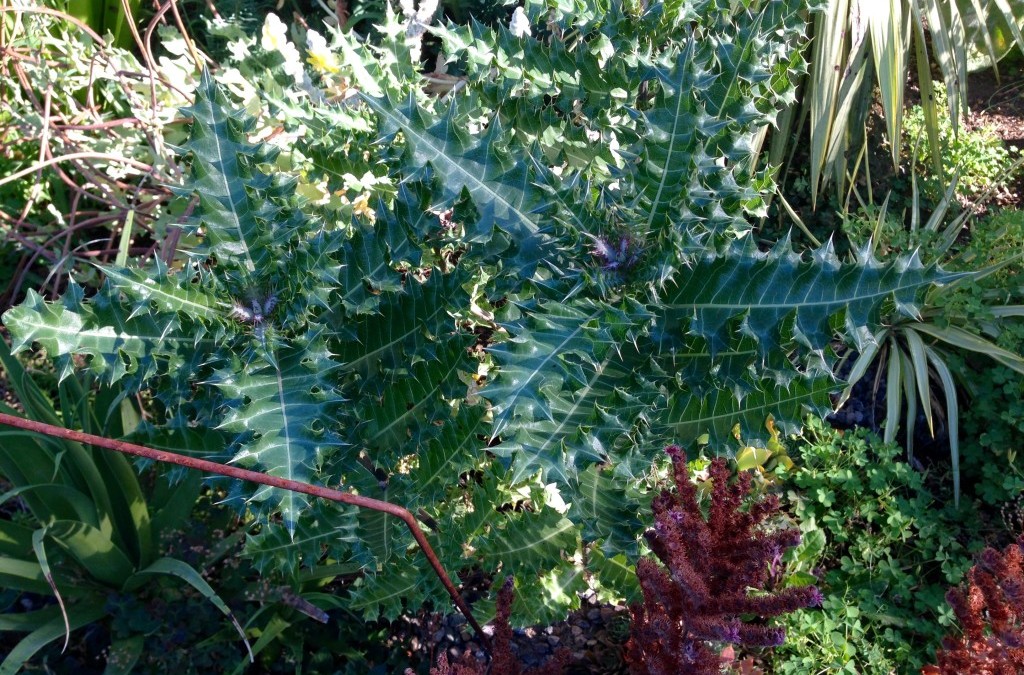 Uh oh. It’s getting to that time of year when good intentions are headed toward next-year’s to do list. How did it go so fast? I mean, it always does, but still. And to clarify, by ticking-off, I mean making the task list mad!

Does it happen this way for everyone? I freely admit I’m a terrific idea generator, and not nearly as prolific when it comes to follow-through. Once I figure out how something will work, I’m happy to wipe my hand clean, and move on to the next problem.

For instance, this pathway to the backyard is too skinny. So I found some 12″ pavers left behind by the previous owners, and thought, huh, maybe I could widen it that way–with crushed rock as a buffer between the pavers and the cement. It’s not a fancy display area, though you do pass a good Ashe Magnolia. And these are not the keeper pavers, and not exactly how I want to do it, but proof of concept is there. You see it, right?

But it’s hard to get things done using that method. And it’s not like Vonnegut’s short story More Stately Mansion, wherein I imagine my magazine clippings represent work as actually done. Nope. Even when I had more time and energy, I liked the problem-solving part of the puzzle better than the shellacking the whole thing and calling it done. I’ll admit, though, a few done projects would be nice. (For the record, I’m not a huge Vonnegut fan, but that one stuck with me.)

And in a surprising twist, that reminds me of a childhood story. A quick one, I swear. We worked jigsaw puzzles when I was growing up. Big thousand piece puzzles sometimes covered the dining room table for days. Everyone got in on it, though some of us were more dedicated than others. I guess it’s not a perfect analogy for my current work style, because with jigsaw puzzles, I’d stay up half the night, thinking I’ll go to bed after I find one more piece.

So back in the family days of jigsaws, without fail, at the tail-end of the puzzle there’d be six pieces missing. Because every kid wanted to put in the last piece, regardless of how much effort they exerted. And I’m not mentioning any names in particular. Especially not David. Yes, that’s him making the face.

And as long as I’m on an aside. Here’s another one, but honestly related to my garden to-do list in a big way. As I’ve mentioned, I’m trying to recover from a pesky concussion. It was only recently diagnosed by doc who knew what to do about it. My biggest problem is fatigue, though my thought tethers do tend sometimes to stretch out like a rubber band. “Hey, get back here.” So time alone was not going to make it better. Determined powering-through would not meet success, no matter how well it worked in the past. I needed sleep and rest–and lots of it. I still do, but at least now I have a team to help me with an actual plan for recovery–with at least some hope of relief.

Apparently, with a concussion–which doesn’t sound nearly as cute when called a brain injury–your balance and vision can get out of whack–without you even particularly realizing it. Since vision and balance are essential survival skills, it takes a lot of brain energy to keep one upright. And if that’s not enough insult to injury (the broken shoulder and surgery almost 2 years ago,) I needed to do even LESS in order to get better. Hells bells. It was hard to imagine doing less, but I’ve begrudgingly gotten with the program.

And it turns out, I’m seeing subtle improvement. For instance, fiction reading. I’ve been a maniac reader my whole life. But for the past two years, I couldn’t do it. Couldn’t focus, couldn’t remember, and couldn’t stay awake. (In typical Irish Catholic girl fashion, I thought it was because I was bad and not trying hard enough.) But now I’m reading again before bed, 15 or 20 minutes, and that’s marathon reading compared to what I was able to do before.

I have a do-less schedule now; my speech pathologist help me put together. It’s not imposed but rather an aide to help me stick to basic essentials. Between my shoulder, balance, and vision exercise, I had 3 solid pages of exercises. And I know, you’re thinking, I wish someone would say I must nap every day. Yes, I agree. We should all get naps. However, if you can’t get through a day safely without one, it’s kind of a problem. (The beach ball is for a neck exercise, not swimming at the beach. Dangit.)

Anyway. Gardening. I don’t have enough time for it, even though it’s just right outside the door. But I’m still thinking, and planning, and studying other gardeners good ideas.

So in the planning category, here are a few things I’ve gathered with good intention. I think these could be pretty cool somethings–one of these days.

Here’s a wider shot–but the brick is still just hanging out. At least Pumpkin can dig a hole there.

Of course, some people implement with aplomb. This is the handiwork of our Divine Ms. JJ De Sousa, of course.

I almost put this stainless steel bowl in giveaway, but I like it with this little Cyperus payrus ‘Baby Tut’. It was an Estate Sale find from way back.

My neighbors gave me a pair of old laundry carts. I have not come up with a brilliant application yet, but I love them. This is a temporary idea. When I bring my Ponytail Palm back inside for the winter, maybe this will keep Mister Kitty from using it as a roost–after he turns it over several times and makes a bunch of big mess.

Here’s the other one with another temporary plant. I’ve been meaning to divide the Aloe Noid and plant in two rectangle red planters. That’s a corner of one in the photo about. I’ll probably get that done about time they need to come in for the winter, but those won’t be the best indoor pots. Truth is, I’m not very good at overwintering plants.

But this, I think, is a good and super easy idea. I collected a few election-season lawn signs and use the innards to keep dogs from leaping dead center in my plants. It’s worked pretty good so far with Pumpkin. But it’d probably be better if I criss-crossed a couple to protect plants from my grandpuppy Pokey, aka Jiggery Pokery.

Pokey was supposed to be a Pittie Pup, but turns out he’s an extra strong Beagle.

I found this rusty plant stand in a free pile in the former neighborhood when they were moving. Now that we’ve moved, I realize how much incentive you have to give up things before you make the move.

I found this wooden stoop at the Rebuilding Center for $15. I was thinking I’d put legs on it myself, and then use as a potting table in the storage/work area beside the house to the east. 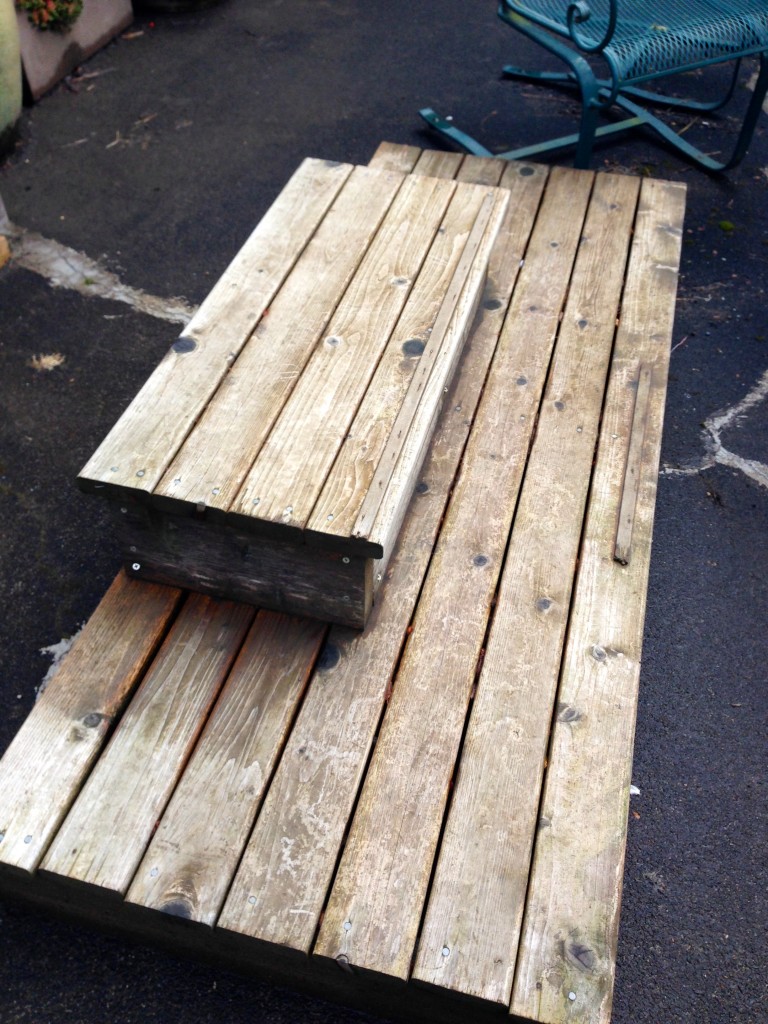 Former stoop to become potting table in the work area.

I did manage to remove the step.

And then I bought this table from a guy at a recycled art fare in Vancouver WA, and he said he could put legs on it for me. That reminds me, I need to call him.

This blue Hollywood Lights cart is my latest find. I got for $25 at an Estate Sale. It was originally $50, but Sundays are generally 50% day. Sold.

Here’s an old piece of a fireplace grate. Not brilliant, but I like it. Imagine if the plant was a little beefier. (We’re still waiting on the rain the forecasters promised us for today.)

The andirons were shinny brass when they went outside. I like them better now.

After hearing about my concussion, I hope you’ll indulge me on this rather rambling, not particularly well-organized post. I could do a better editing job, and I do love to edit. But then it’ll take me another day, at least, and all that extra brain power to make it shorter. Here’s what Mark Twain says about that:

You’ll have to excuse my lengthiness—the reason I dread writing letters is because I am so apt to get to slinging wisdom & forget to let up. Thus much precious time is lost.

I’d love to hear about your finds and how you incorporated them in your gardens. Are your eyes bigger than your action anything like mine? I sure hope so. I’d hate to be alone.