Grocery shopping in a Zanzibar Market 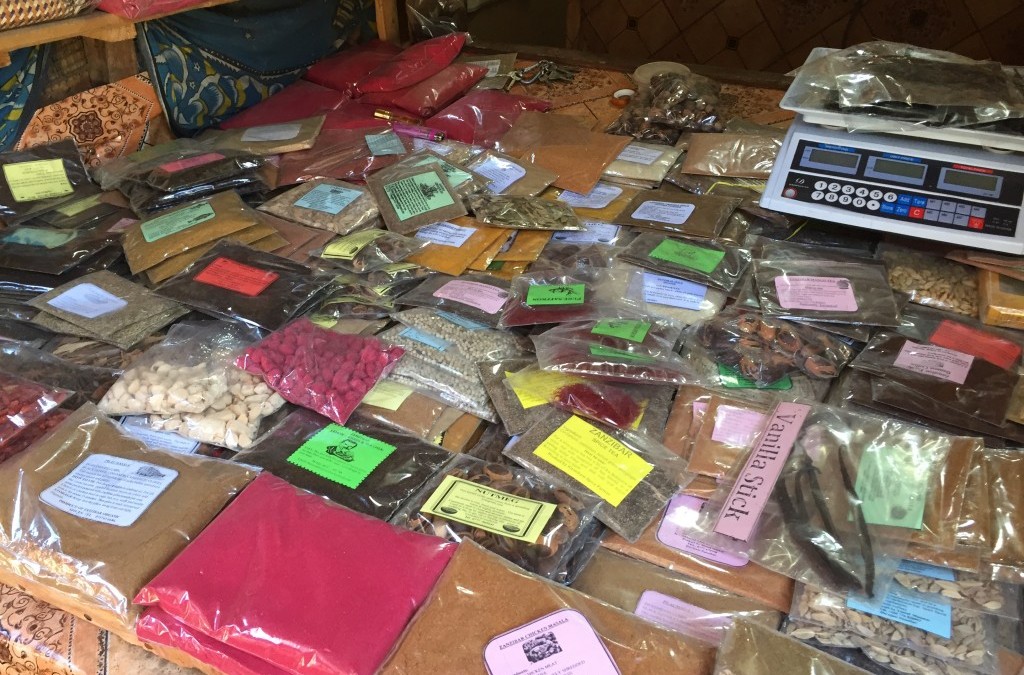 It can be challenging as a tourist and get a sense for local life and culture. It’s always a bit awkward when you’re stopping to photograph something that seems novel to you, while the people around you are just in a hurry to get on with their day and some tourist is in the way making a big deal of something that seems mundane and trivial to a local.

Sometimes there’s just no getting around it. You are a tourist. You don’t know where you’re going or how anything works. It certainly gives you an appreciation for the people you see at home struggling with the parking meters, or whatever the tourist tell is in your city.

I’m shy and anxious and don’t like people to see me fumbling with something I don’t know how to do, but I like to see where people buy their food. In some ways it’s a universal experience. You get to see locals working and shopping. You get to see what grows where, and what’s in season. Plus you find alien looking produce that perhaps expands your palette when you get back home.

On the other hand, I find it fascinating (terrifying) that the grocery shopping skills I take for granted at home are totally non-transferrable.

I’ve think been yelled at in every country I’ve been to for doing it wrong. Don’t go up to the vegetable stand in an Italian farmer’s market while they’re waiting on someone else. Don’t touch the apple you’re about to buy from a French fruit stand. Don’t take your produce up to the checker in an Italian supermarket without first weighing it and getting a sticker. Etc. Little by little I have learned rules, but I don’t understand the entire system, and I’ll to continue to make mistakes. I feel like I better understand what a dog feels like on the first day of puppy class. I know I’m not doing it right, but I don’t know what it is they want me to do.

In Dar Es Salaam, the port town on the Tanzanian mainland, I tried to go to the grocery store the hotel doorman pointed us to. But I found the armed guard at the front door too intimidating and chickened out.

I was happy to get the chance in Zanzibar to see an open air market, with rows and rows of luscious fresh produce.

You may notice that the photos all have an orangish cast. Do not adjust your monitor. The entire market was covered in orange tarps to provide shade. It helped cool things off a little in the 85 degree temperatures, but the humidity was still a killer.

I didn’t realize watermelon originated from Africa, where it grows wild in Southern part of the continent. Notice the spices, which the island is famous for, hanging behind the fruit stand.

A very piña colada mix of fruits. Those mangoes were heaven.

A lot of our camp / hotel meals were based on peppers, potatoes, and rice, which all grow locally. You’ll see that most of the people in the background are men. Men do most of the market shopping in Zanzibar.

Until just now, editing my photos, I did not notice the man resting behind the bananas. I try not to photograph people without their permission, but he must have assumed I was taking a photo of him. It’s hard not to be a rude tourist, even when you’re trying.

I was fixated on these big stalks of bananas.

One of the market treats is fresh sugar cane juice, which is pressed on-the-spot.

It’s amazing what you don’t notice at the time. I spy a bag of fresh cashews at this spice stand that I wish I had picked up. And I got another person looking at the camera, when really I was eyeing the bananas again. I never really think to take photos of people, since I’m always looking at the plants, or in this case produce, but now I’m happy to see the people at the market.

The things you think you’ll remember later but can’t… I think this bag of saffron was $5.

I have not yet developed the skill of telling the difference between breadfruit and jackfruit. I haven’t yet tasted either one. Apparently jackfruit is good but has a smelly cheese aroma. And breadfruit is plain flavored and it’s all about the preparation. Both are super nutritious and easy/plentiful to grow in tropical climates. I must try jackfruit one of these days. I’ve been seeing a lot of recipes that use it as a pulled pork replacement.

Citrus peels were drying in the sun to be ground into cooking spices. I mentioned it was hot out. You may notice the women in the background, covered head to toe, like the vast majority of women in Zanzibar, being a 97-99% traditional Islamic culture. Except for the tourists in certain pockets, and an outdoor Catholic church service in one spot, I believe I saw only three women without their heads covered the entire time I was there. A couple young toddler girls didn’t have their heads covered, but most did. I wore a scarf over my head when outside the tourist areas. With the heat and humidity, I was dying. Everybody else looked perfectly comfortable, and much more stylish than me in my funny scarf. You must get accustomed to it after a while.

How about you, do you hit up the local markets when you travel?